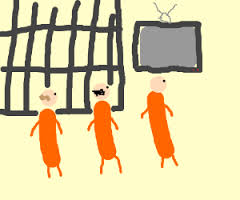 There was a schedule for TV, but Lulu overrode it and for the most part the pod was peaceful, so the officers let it slide.  She and Christiani loved hip hop and would switch channels and turn up the volume full blast.

I hate that kind of noise. It disturbs my spirit. After living in the peace of the woods up a dirt track for four years, loving gospel music, the violent, jagged, relentless beat of hip hop was as much an assault on my senses as was the stuff they put on plates and called food.

I stood up to Lulu.   I had hidden powers..  During the time I shared a cell with Christiani, I had learned all of their scams from selling milk to the Korean hooker who had lots of funds ,accumulating fruit and sugar and where they hid the ‘hooch’

The TV was my enemy and Lulu loved the TV. I started sabotaging the TV.   The TV was on from 7am until 11pm and 1am on Friday and Saturday. Every morning they opened the cell doors to let Lulu and Christiani out to go serve the food. I’d rush out of my cell before they emerged and unplug the TV.   No one would notice the TV was off until 11 am or so because after breakfast at 5am, those of us who had breakfast went back to our cells and slept and those of us who didn’t stayed asleep until we had to get up to clean the room for morning inspection at 9am.  Again, most people would go back to sleep after that, until 11 or so when the pod woke up. 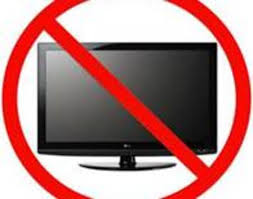 I modified my assaults on the TV to simply turning the volume down to zero after Lulu had complained that someone unplugged it and she’d lost a station she’d set up.  Remembering we were in jail and most of us were going to get out at some time, no one wanted to do anything that would really jeopardise their chances.

To be involved in a fight was a felony and we could be made to serve time for that.  No one wanted that so Lulu didn’t fight physically even though she was strong and muscular.  If it had come down to physical fighting, I’d have been as cowered as the rest.   BUT when it comes down to mental warfare, I’m clever. I found ways to undermine her, win some peace for myself and make life more bearable for the Hispanic girls.

Lulu allotted TV time to the Hispanic* girls using the ‘official schedule’ only when it suited her ends.  Most of the girls didn’t speak English and English was the first language in jail.  The officers didn’t speak  Spanish and most of them were poor and doing this job because it was a major employer in the area.  The money was crap and they spent all day walking grey corridors as much prisoners as us.  They liked Lulu and they were rife with prejudices about Hispanics, whom they referred to collectively as Mexicans.

The TV was high up on a wall. There were only two ways to reach it and change channels. One was to use a broom, only available during cleaning time [8am – 9am] when mops and brooms were brought in and then taken away.   The other was to stand on the steel benches, step from there onto the steel table, all built into the floor, and from there on to the upturned dustbin.  it was a reach from the top of the dustbin to the TV controls and only those who were tall enough could do this.

Hispanics are generally shorter in stature than me and most of them couldn’t reach the controls.  I had the height and extra long arms.  I said I had hidden powers.. not so hidden, just not so obvious.

When something came on that was offensive to my ears, Jerry Springer or Hip Hop for e-ghastly-xample,  and if Lulu was out of the pod, I’d turn the channel to a Spanish one and turn down the volume as I did it, saying to them ‘is this OK?’.  I had no desire to watch TV and the drone of a Spanish soap opera at lower volume was far more peaceful to my ears than hip hop and the add bonus is that the Hispanics got to watch their TV.  And I made allies.

Soon they’d be approaching me and asking  ‘Miss Sunny can you put on Spanish TV? please.’ I became their champion.  The war of the TV was on and I was making headway. I never stopped. When either of the two top bitches were out of that pod, I turned down the volume or changed the channel.

When you don’t speak the language of authority you are more powerless.  You depend on someone else to interpret your needs. Maria took on that role a few days after her arrival

* I’m sorry if I may have appeared non-PC in my cultural definitions. If I did, by some happenstance, here’s my answer.   For the sake of easier communication,  I’m calling the South American female inmates Hispanics.  The officers called them ‘Mexicans’. Hispanic works as a collective term because jail does form collectives and separatist groups. My purpose seems to be to not be of any group but strive to engage with and join up dots.